How to Choose a Good Translation – Technical Junk


Thus far, we’ve identified two guiding truths that should help us find a good English translation: 1) God has always intended for his written revelation to be communicated in the common language and 2) inspiration and inerrancy apply directly to the original manuscripts (autographs), therefore those translations and copies that seek to faithfully reproduce the intent of the originals can be said to be inspired and inerrant in a derivative sense. We’ve also seen that every major English translation (KJV, NKJV, NASB, ESV, NIV, NLT) has been translated and compiled by committees which were committed to these two truths and can be trusted.

Before you run out and simply grab a translation off the shelf, there is another thing that has to be addressed…the “technical junk” as I call it. The technical matters involved in producing a Bible translation to which I refer are the textual issue and translation theory.

During the 1st century following the resurrection of Christ, God moved men to pen His Word (2 Peter 1:21). The result was a group of letters and books, written in Koine Greek (known as the autographs). These letters and books were copied and recopied throughout the centuries and distributed throughout the world. As the autographs have long since turned to dust, it is these copies which comprise the manuscripts of the New Testament. Today, we have about 4800 Greek manuscripts. We have about 3000 Gospels manuscripts, 800 Pauline manuscripts, 700 manuscripts of Acts and the general letters, and just over 300 manuscripts of Revelation. These numbers do not include the lectionaries, over 2000 of them that are mostly of the Gospels, nor do they include the Scriptural citations by the Church Fathers, which are legion. At the same time, not all of the available manuscripts are complete copies. The earlier manuscripts are fragmentary, sometimes covering only a few verses. The later manuscripts, however, generally include at least all four Gospels or Acts and the general letters or Paul’s letters or Revelation.

The “Traditional Text” is also known as the Byzantine Text or Majority Text – a category into which the Textus Receptus falls. The Traditional Text is called the “Byzantine Text” because the manuscripts it contains came from all over the Greek-speaking world at that time. It is called the “Majority Text” because it contains the majority of the available manuscripts (all of which date no earlier than the 4th century, with the vast majority of those dating from the 9th century or later). The "Traditional / Majority / Byzantine Text" is a statistical construct that does not correspond exactly to any single known manuscript. It is arrived at by comparing all known manuscripts with one another and deriving from them the readings that are more numerous than any others. There are two published Greek texts which purport to represent the Majority readings -- Hodges & Farstad 1982 and Pierpont & Robinson 1991.

Of the popularly available English translations on the market today, only the KJV and NKJV are based on the Traditional Text. (Actually, these are both based on the TR.)

There is a Greek text available today which is known as Novum Testamentum Graece and typically refers to the Nestle-Aland editions of the Greek text; named after the scholars who led the critical editing work, abbreviated NA27 (though NA28 is now available). United Bible Society has also published a critical text (UBS4) which is almost identical to the NA27. The Critical Text is used as the basis of almost every modern English New Testament translation and has become the standard for academic work in New Testament studies.

The “Critical Text” is called such because it is an eclectic text compiled by a committee which employs sound textual criticism to examine a large number of manuscripts in order to weigh which reading is thought closest to the original. They use a number of factors to help determine probable readings, such as the date of the manuscript (earlier is usually better), the geographical distribution of a reading, and whether the variant is an accidental or intentional corruption. Both UBS4 and the Nestle-Aland editions note a large number of textual variants, or differences between manuscripts, in the critical apparatus—the extensive footnotes that distinguish the Critical Text from other Greek New Testaments. The Critical Text is also known as the Alexandrian Text because so many of its manuscripts come from northern Africa.

A Note on Textual Variants

A textual variant is simply the difference in wording found in a single manuscript or a group of manuscripts (either way, it’s still only one variant) that disagrees with a base text. Some are tempted to taut how much agreement the Traditional Text has versus the Critical Text. This is, in reality, a straw man. Let’s look at the larger picture. We have a little more than 4800 available manuscripts. Among the total manuscripts there are about 400,000 variants. That sounds like a lot, but it’s really not. Do the math. The variant readings of just the available manuscripts amount to about 1.2% of the total text. When you factor in the lectionaries and readings in the Church Fathers, the readings in all of the manuscripts agree about 95-98% of the time.

It should also be noted that much hay is being made about the corruption of the Critical / Alexandrian Text and the purity and divine preservation of the Majority Text. To those proponents I would say this, be honest. The Majority Text is not the divinely preserved original text of the New Testament. If that were true, then it’s only really been available in anything other than the TR, which dates to 1516, since 1982. If this was the text God wanted preserved why is there no real evidence of it in northern Africa? Were those Christians left without Divine revelation until 1516? Hard to believe! Besides, the Majority Text and Critical Text disagree in only about 6,500 places. Put another way, they agree in about 98% of their readings.

Of the popularly available English translations on the market today, almost all (except KJV and NKJV) have been translated using the Critical Text for the New Testament.

Why address all of this? Simple. If you hold to a Majority Text position or preference, then your English translation choice is limited to either the KJV or the NKJV – if you’re going to be consistent that is. If you hold to a Critical Text position, or at least understand that the Majority Text vs. Critical Text issue is really no big deal, then your options are open.

Functional equivalence, also known as dynamic equivalence, seeks to render the thoughts or meanings of the source language as it was understood by its original readers so that modern readers understand it the same way. Thus, it does not seek a word-for-word, literal, rendering, but a thought-for-thought rendering. Functional equivalence seeks to render the source language as it was intended by its authors. Therefore, word meanings and nuances are translated with the closest possible modern terms, the syntax and grammar of the source language is rendered so that the modern reader understands what the translator presumes the original author was thinking, and idiomatic expressions are translated with the most modern idioms. The goal of formal equivalence is readability and understandability over word-for-word adherence.

How does understanding translation theory affect one’s choice of an English Bible? If one is seeking a word-for-word translation, then you would naturally choose the KJV, NKJV, ESV, or NASB. The problem with formal equivalence translations such as these is that their grammar and syntax are often stilted; making them more difficult to understand for most people. If one wants a purely thought-for-thought translation, then you would gravitate toward the Good News Translation, New Century Version, New Living Translation, or Contemporary English Version. However, if one wants a readable, understandable translation that seeks to preserve as much of the literalness of the original as possible while taking into account the idiomatic expressions, grammar, and syntax of both the source and receptor languages, then the best translation available is the NIV.

Dollar for dollar and pound for pound, the best translational theory for day-to-day reading and public use is a balanced theory; namely the NIV. However, translations produced using formal equivalence and functional equivalence have their benefits and should not be disregarded out of hand. Remember, God has always intended for his written revelation to be communicated in the common language. Since most modern English versions (particularly those mentioned in this blog series) adhere to the truth that inspiration and inerrancy apply directly to the original manuscripts (autographs), therefore those translations and copies that seek to faithfully reproduce the intent of the originals can be said to be inspired and inerrant in a derivative sense, there is no need to deprecate any of them.

After taking the matters addressed in this series into consideration, the Christian must answer some final pertinent questions. What type of translation am I seeking; literal, thought-for-thought, balanced? Do I prefer the majesty of 17th century language, somewhat of an update of that era, or do I want something modern? Does the Greek text used in translating the New Testament make a difference to me? When you can answer these questions, you are ready to go to the store. Have fun, buy several different translations, and, most importantly, read it!

Are We Alone in the Universe?

I was zoning out a few afternoons ago when something came on TV that piqued my interest. You know how it is - you’re working on something else while the TV mindlessly drones on and on. You’re not really listening, but kind of listening until something hits you. Well, it hit me. A talk show host was interviewing singer Katy Perry about something that slips my mind and doesn’t really matter to me anyway. What hit me was that Katy Perry, in the midst of a discussion about something totally unrelated, mentioned that she was raised in a Christian environment where she was “taught to believe certain things about life and spirituality” but had recently come to question her beliefs because of shows like UFO Hunters on the History Channel. The question of UFO's and intelligent life on other planets has become very popular over the decades. I’m a bit of a Sci-Fi fan, so I can see the attraction. TV shows, movies, and authors postulate about alien life and its role in earth’s histor 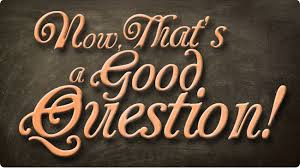 I was given a great biblical question for our  Now That’s a Good Question  series. The question is an interpretive one about a prophetic passage of Scripture in the book of Revelation. The wider context reads, 7 When the thousand years are over, Satan will be released from his prison 8 and will go out to deceive the nations in the four corners of the earth -- Gog and Magog -- and to gather them for battle. In number, they are like the sand on the seashore. 9 They marched across the breadth of the earth and surrounded the camp of God's people, the city he loves. But fire came down from heaven and devoured them. 10 And the devil, who deceived them, was thrown into the lake of burning sulfur, where the beast and the false prophet had been thrown. They will be tormented day and night for ever and ever. (Rev. 20:7-10) The question focuses on verses 7-8 of this text, and is this, Revelation 20:7 says that when the thousand years is over, Satan will be released from his